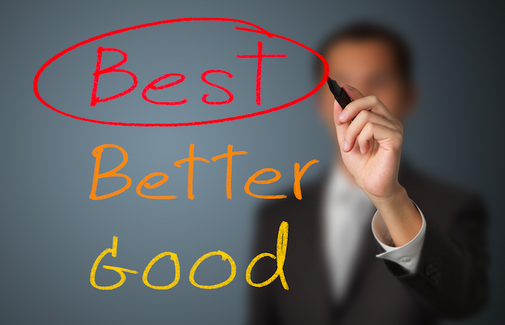 Being THE Best VS Being YOUR Best

Home » Blog » Being THE Best VS Being YOUR Best

Why limit yourself to being THE best?

​Being YOUR best is so much better!

I was listening to a podcast the other day (Dax Shepard, “Armchair Expert” – I highly recommend!) where Dax was dialoguing with Tom Brady. Brady made a comment that part of his success was from always “trying to be his best.” That he knew and saw plenty of professional NFL players in the locker room who wanted to be THE best and never made it in the league.

That got me thinking about my own experience.
As a young, aspiring high school trumpet player, I was always second chair to my high school trumpet nemesis, Jack Schantz. All through school, Jack was #1 and I was behind him. Always!
One week I decided I had enough. The challenge piece for the first chair was a demanding piece by Boccherini. I practiced and practiced that piece until my lips chapped and cheeks burned. Come challenge day… I nailed it!

I got first chair. I was the best!

Until the next week and Jack was right there again.

It wasn’t until much later in life when I was a little wiser than my 16 year old brain could comprehend what was going on.
One of the differences (besides Jack being incredibly talented) is that Jack wasn’t trying to be THE best, he was always practicing and trying to be HIS best.
Jack went on to become an outstanding professional musician whose resume includes being the artistic director of the Cleveland Jazz Orchestra, playing with Woody Herman, Tommy Dorsey, Guy Lombardo and others.
I went on became a big fan.

Here are 3 reasons that being THE best may be a fool’s errand:
1.
Artificial Limits
When we limit ourselves with some esoteric goal like being THE best at something, we limit the potential of what may be beyond. And, as any old Western gunslinger movie teaches us, there is always someone faster on the draw that eventually comes along.
If you keep challenging yourself to be YOUR Best, there is no limit to that potential. You have an ever expanding cornucopia of options and success.

2.
THE BEST is arbitrary
In most situations in life, No one really knows what THE best is. No one thought the 4 minute mile mark would ever be broken until Roger Bannister did it in 1954. That “best” has been bested many times since and currently is held by Hicham El Guerrouj from 1999. If Hicham had stopped at THE best, 4:00 minutes would be still be the record. Try thinking about your own experiences as if there is always something better to look forward to. Not a number on a scale or time in a race. Just a little better version of you.

3.
The yardstick is skewed
There is an expression gaining popularity right now called “Comparison Hangover”. It basically means looking around and worrying that we, our lives, our achievements, our experiences, don’t measure up.
I call BS on that one.
Comparison hangovers are hard to beat. But there is huge joy to be found in letting those go. Setting some artificial, arbitrary limit on success based on our perception of others is an exercise in futility. And we will fail at that every time!

But, achieving YOUR BEST can be and is an everyday victory. I can be little better today than yesterday. In the gym we can see this all the time. I lifted a little more, ran a little farther (faster), completed more reps or improved my flexibility.

Ultimately, achieving YOUR best will be far more rewarding than being THE best.
For one week, I worked hard to be the best trumpet player in the band. Jack worked everyday at being his best… and it showed.

What is your best? Work on it. Achieve it, Celebrate it everyday. There is no limit to what YOUR best might look like.